Surprisingly enough I'm learning to love writing. With that said, I feel my posts have been more reflective and creative and haven't been appropriately keeping everyone up to date on the medical side of things. I know these posts aren't as fun to read, but many of you have been asking for the latest treatment four-one-one. Here are some treatment details and round-about important dates ...

My second round of chemo was a breeze. I was only admitted for five days and was released back into the world on the sixth day. They drew my labs three times as everyone was in shock at how "healthy" and well I was responding. I have been out living the, "Cancer-Land Dream" for exactly one week now. Part of being an outpatient is going to The Cancer Center to get labs drawn every other day. It took about a week for my blood counts to drop, but once they did, they really dropped. Today I got my labs drawn and was sent straight to the emergency room to be immediately admitted back into six-central (my wing of the hospital) for transfusions.

I have felt super lousy the past few days in terms of being incredibly sleepy and getting weird bruising in my sleep, as well as a weird rash on my feet, ankles and head. I really should have paid more attention to these signs instead of brushing them off, but that's just the kind of tough girl mentality I have. And I believe that is the same mentality that's going to save my life.

Now don't get too excited! Transfusions aren't anything too serious, people. The word "transfusion" really seems to freak people out. So, let it be known that blood transfusions are the easiest part of having leukemia. Platelets are the second. My last platelet transfusion didn't go so swell. I had a few difficulties with welting, and blood coming to the surface of my skin, but today went great. I'll have more blood drawn at 4am to check my hemoglobin. At that time a decision regarding a blood transfusion will be made based on those lab results. I'm fairly confident that I won't need one and will be headed back home tomorrow. I'm a strong believer in positive manifestations.

Ideally I was hoping to be re-admitted to cottage hospital the day after Thanksgiving, November 29, 2013. After speaking with Dr. Greenwald today (he won doctor of the year) he agreed we could wait until then. I couldn't be more excited. Thanksgiving is my favorite holiday!!!!! Gobble Gobble!

This next round of chemo is a big one! The biggest, most important, most intense, and most potent thus far. As I've mentioned in previous posts, I'll be receiving a pediatric regiment to hopefully knock this thing out of me. It's expected to be rough and I'm expected to be in the hospital for 3-4 weeks. I'll keep everyone posted on that.

As always, I'm STILL completely blown away by how many people are reaching out. It feels so good to have so many beautiful souls rooting for me. I can't wait to pay it forward. 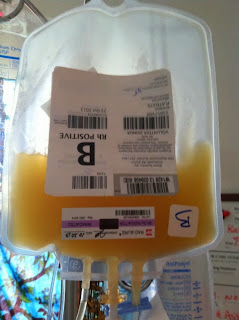 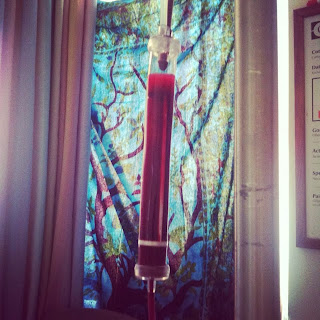 Love Love sooo much Love,
K
Posted by The Dawg Blawg at 9:22 PM